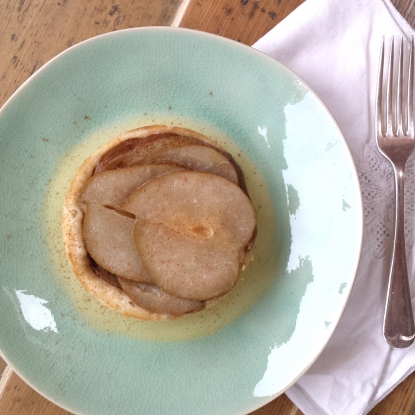 Tarte tatin is basically a tart that's cooked upside down. You bake the tart with the pastry base on top and then when you take it out of the oven you tun it over. This is so the “top” of the filling cooks closest to the heat and gets nice and caramelised and also a great way to avoid that wretched soggy bottom.

Traditionally you make these in a frying pan which can go into the oven. I don't have an oven-proof pan so I used four tiny cake tins instead and did it all in the oven. Could also work in one large cake tin.

3 large pears (if you don't have enough pears, and an apple to the mix)

for the sweet crust pastry

(Or if you don't want to make your own, you can just use 100g shop-bought puff or sweetcrust pastry)

First make the pastry. Combine the flour & sugar. Using chilled butter, cut it into cubes and add to the flour. Rub the butter into the flour with your fingers until it forms a breadcrummy consistency. Add a tbsp of water at a time and mix it until it forms a dough. Don't over do it - as soon as you can knead it into a ball, wrap it in cling film and put in fridge.

Melt the butter with the star anise so that it infuses into the butter. Once the butter's melted let it sit for a while to infuse further. Slice the pears about half a cm thick. Arrange on top of some kitchen towel and press another sheet of kitchen towel over to draw out some of the moisture. Combine the pears, sugar and butter (star anise removed) in a bowl.

Roll out your pastry. 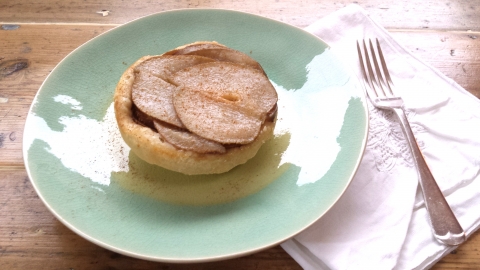 If you're using small cake tins, cut your dough into 4 equal pieces, roll each into a ball and flatten out into a disk shape onto a floured surface. Roll it out until about 5mm thick and a bit bigger than the circumference of your tin.

Make sure your cake/flan tin is lined with baking parchment and grease the sides. Arrange your pears on the base of the tin, layering them up to about 3-4 layers. Spoon out any excess butter/sugar mixture on top and then place your pastry on top and tuck in the sides between the pan and pears so it forms a little pastry pouch over the fruit.

Place in the oven for about 25 mins – until the pastry on top starts to brown a little and it's oozing stickiness.

Take out of the oven and let cool for a few minutes. Run a knife round the edges to loosen it up and then turn the pie out by placing a plate over the tin and then inverting it. Do this quickly and avoid being burned by the hot caramelized juices.

Serve warm with a dollop of cream and a sprinkle of cinnamon.