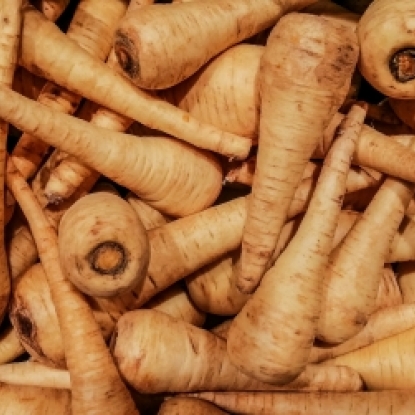 This creamy-white root vegetable is related to carrots and parsley and has been cultivated for human consumption since at least Roman times. You may associate Parsnips with winter roasts and the Christmas table, but they can be grown year-round.

Parsnips taste best after the first frost, as some of the starch they contain is converted to sugar in cold weather. They do, however, become sweeter when cooked, so taste great any time of year!

Parsnips are low in calories and rich in fibre. They’re a great source of potassium and antioxidants, and contain good levels of some B vitamins, vitamin C, vitamin E and vitamin K.

The potential health benefits of parsnips include anticancer, anti-fungal and anti-inflammatory properties, as well as reducing blood cholesterol levels.

How do you store parsnips?

Parsnips need to be stored in a cold, dark place. They are best kept in the coldest part of the fridge, where they will keep for two weeks or more. As they do best in humid conditions, you can wrap them in a paper towel and keep them in a container or a bag inside the fridge. Make sure you remove any parsnip greens and allow washed parsnips to thoroughly dry before storing.

Store parsnips away from apples and pears, as those can emit a gas that makes parsnips taste bitter.

Can you freeze parsnips?

Parsnips can be easily frozen for later use. To freeze, peel the parsnips and slice them into ½ inch cubes or slices. You may need to remove the fibrous core if it’s too hard.  Before freezing, blanche the parsnips in boiling water for three minutes, then chill in ice water. Drain and let dry completely before freezing, to avoid freezer burn. Freeze in containers or bags, making sure to leave at least ½ inch of space at the top. If freezing in bags, remove as much air as possible before freezing.

How do you prepare parsnips?

Wash and peel parsnips before using, as parsnip skins contain a group of natural toxins called furocoumarins that can cause stomach-ache if eaten in large quantities.

Similarly to carrots, parsnips have a fibrous core that can sometimes be tough and woody. If that is the case, you can remove it.

What can you make with parsnips?

Although they can be eaten raw, parsnips are more often cooked. Cooking parsnips in the oven Is probably the most popular way to prepare them, but this extremely versatile vegetable can be pickled, boiled, steamed, mashed, roasted, baked, fried or braised. Parsnips are great in soups, curries, stir-fries, stews, salads, pies and even desserts. They go well with other root vegetables, greens, and, perhaps surprisingly, apples.

See our full list of parsnip recipes for more inspiration on how to use this wonderful veg.