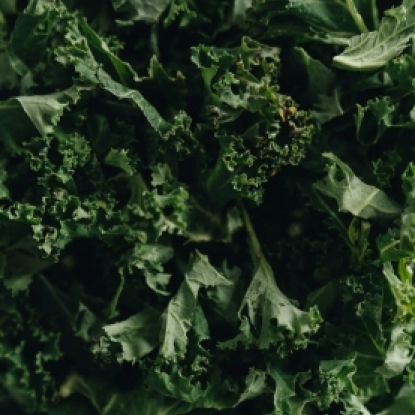 Hyped by healthy living influencers and somewhat insufferable celebrities, kale’s popularity may seem like a recent phenomenon, but this member of the brassica family has actually been cultivated for thousands of years. This nutrient rich superfood originated in Asia Minor and the eastern Mediterranean and has been an integral part of German, Dutch and Scottish cooking for centuries. Kale has a very long season in the UK. It can be grown and harvested practically year round, apart from during the hungry gap (although there's even a variety of kale cultivated specifically for that time of year). The best tasting kale is harvested after frost, making it a wonderful crop for cold climates. Different cultivars of kale include curly leaf or Scots kale, Russian kale and the popular cavolo nero, also known as Tuscan kale or dinosaur kale.

Kale is one of the most nutritionally dense foods around. It’s low in calories and contains large amounts of vitamin A, C and K with good amounts of vitamin B6 and smaller amounts of vitamins B1, B2 and B3. It’s also a good source of manganese, magnesium, copper, potassium, calcium and iron. Consuming kale can help lower cholesterol, prevent cancer and lose weight,

Note: Like all cruciferous vegetables, kale contains goitrogens, which can have adverse effects on your health when consumed in very large quantities. Goitrogens are associated with hypothyroidism (underactive thyroid). While kale can be consumed raw by the majority of (healthy) people without any adverse effects, it’s worth knowing that cooking it removes most of these compounds, which means you can enjoy this wonderfully healthy green worry free. Of course, if you suffer from any health conditions that can be made worse by goitrogens, you may want to talk to your doctor about how much kale you can consume and how.

How to store kale

Kale can spoil easily, so don’t stem or wash it before storage. It can keep in the fridge for a week or longer if you wrap it lightly in paper towels and store it in an airtight bag in the vegetable drawer. Keep it away from fruit and veg like apples, bananas, avocados, tomatoes, peaches and pears, as those emit ethylene, which can make it spoil faster. Kale becomes bitter the longer its kept in room temperature, but will also become bitter when kept in the fridge for too long. It’s best to eat it as soon as possible after bringing it home.

Can you freeze kale?

You can freeze kale both with or without blanching. Blanched kale takes up less space, as the leaves shrivel up. Either way, wash and dry the kale before freezing and remove the woody stem, keeping just the leaves and tearing them into smaller pieces. If blanching, plunge the kale leaves into a pot of boiling water for one to two minutes until it wilts and turns bright green, then immediately follow with ice water to stop the cooking process.

Freeze on a tray first, to avoid the leaves sticking together while frozen. Once frozen, remove from the tray and place in containers or bags in the freezer.

How to prepare kale

What can you make with kale?

Kale can be steamed, boiled, stir fried or baked and can be used in soups, pies, bakes, stews and salads. It can be used in many recipes that call for other greens, such as spinach, spring greens, chard, etc.

Check out our kale recipe collection for even more ideas of what to do with this wonderful green.