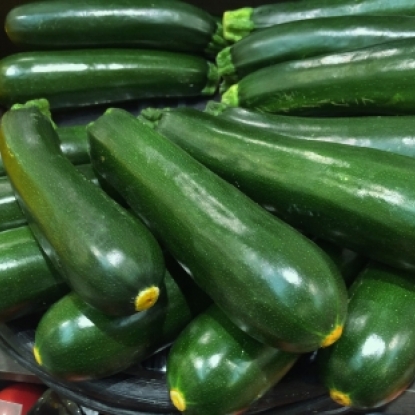 There’s nothing bland about this incredible vegetable, descended from squashes first cultivated in Central America over 7000 years ago.

Low in fat and calories and nutritionally dense, courgettes are healthy, versatile and, when prepared correctly, absolutely delicious.  Find out more about this fascinating vegetable, including why we should probably be calling it zucchini after all.

Courgettes are rich in vitamins, minerals and antioxidants. They’re a good source of vitamin A, vitamin C, vitamin K, vitamin B6, potassium, carotenoids, magnesium and manganese.  They also contain small amounts of zinc, iron and calcium.

They’re also rich in fibre and water, so contribute to healthy digestion.

Courgettes can sometimes contain naturally occurring toxins called cucurbitacins. While this only happens rarely, it’s worth being aware, as these toxins can cause severe stomach upsets and in rare cases can even kill. They can be recognised by their bitter taste, so any courgette that tastes bitter or smells unpleasant should be avoided.

How to store courgettes

Courgettes are easy to store and will last for a few days in the fridge. Do not wash, peel or cut them before storing, just keep them in the vegetable drawer. If you want to keep them for longer,  they can be frozen. See below.

Can you freeze courgettes?

Like many other fruit and veg, courgettes can lose their flavour and texture if frozen raw. However, they can be successfully frozen after blanching. Simply wash them, cut them into your desired shapes, blanche them in boiling water for a minute, then quickly remove them with a slotted spoon and place in a bowl of ice water for another minute. Drain and place on a tray lined with kitchen paper. Pat dry. Place on another tray to freeze to keep them from sticking together. Once frozen, they can be kept in the freezer for up to a year and used in stews, sauces, bakes, stir fries, etc.

How to prepare courgettes

There is no need to peel courgettes. Simply wash and dry them, cut off the ends and then chop them to the desired shape and cook them. Courgettes can be eaten raw, too, though that is less common.

What can you make with courgettes?