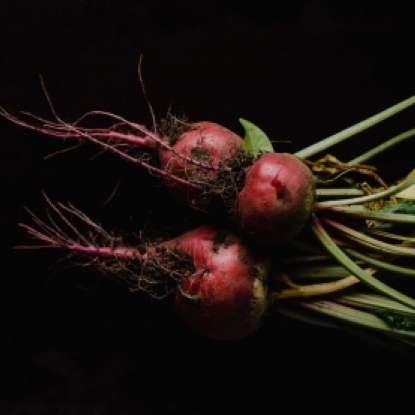 With its distinctive colour and strong earthy flavour, the beetroot (or simply “beet” if you’re American) is a somewhat divisive vegetable. Love it or hate it, though, you can’t deny its many health benefits, its hardiness and its versatility.

Beetroot originated in coastal areas in Eurasia and was originally considered animal feed. Beet greens were consumed by the Greeks as both food and medicine, while the Romans were the first to use the root, first as medicine and then also as food. The original beetroots were either black or white.

There are many different cultivars of beetroot that vary in shape, size and colour. While the bulbous red/purple types are more familiar, there are elongated, carrot-shaped beetroots, as well as colour variations like the golden beetroot and the Chioggia beetroot with its distinctive red and white rings.

Beetroots are low in calories and rich in fiber, folate (vitamin B9), manganese, potassium, iron, vitamin C and antioxidants.  Although they have the highest sugar level of any vegetable, their glycaemic index score is medium (61 or 64, depending on who you ask) and their glycaemic load is around 5, which means they can be safely consumed by diabetics.

Beetroots are associated with health benefits such as lower blood pressure, increased exercise performance, improved digestion and even getting rid of a nasty hangover.

Store beetroots in the coldest part of the fridge, where they will keep for up to three months. To prepare them for storage – remove the greens and any soil. It’s best not to wash them before storing, but if you must, make sure they are thoroughly dry before putting them in the fridge.

We recommend only freezing cooked or roasted beetroot, as frozen raw beetroots have a grainy, somewhat unpleasant texture.   The easiest way is to scrub them clean, boil and simmer until fork-tender and then peel and let cool. You can freeze small beetroots whole, but chop larger ones into slices or cubes before freezing. To avoid them being stuck together, you might want to freeze them on a tray first, before putting them in freezer bags.

Frozen beetroot can be roasted (no need to thaw first), used in salads or reheated and eaten as a side dish.

If you want raw beetroot to use for juicing, it’s best to juice first and freeze the juice instead.

Peel the beetroots before using or eating, though you can do this after cooking or roasting them. We do recommend giving them a thorough scrub to remove any unwanted soil (and anything else) if you’re going to cook or juice them unpeeled.

What can you make with beetroot?

Beetroot is an incredibly versatile vegetable that is wonderful raw, cooked, roasted, steamed or even baked as cake or brownies. A popular side dish on its own, it can also be roasted with other root veg, turned into vegetable crisps or even into beetroot pesto!

See our full list of beetroot recipes for even more inspiration.