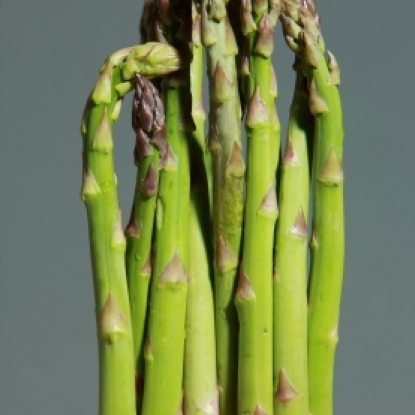 The young shoots of this ancient crop have been revered as a delicacy for thousands of years and were once in common use as medicine, because of the plant’s diuretic properties. If you see it in our bags, enjoy it while it lasts! We only source British asparagus and its season is incredibly short. Find out more about this fascinating vegetable below.

Where does asparagus originate from?

Asparagus is native to eastern Mediterranean countries, with some wild varieties spotted in Africa. As noted above, it was certainly cultivated in ancient Egypt and that is perhaps the earliest reference to it being cultivated as a crop.

Where is asparagus grown?

The biggest global producer of asparagus nowadays is China, followed by Peru, Mexico, and Germany (which also imports huge amounts of asparagus to meet demand). While not a global player, the UK does produce its own high-quality asparagus for a couple of months or so a year. Out of season asparagus you find in the supermarket in the UK will have come from either Peru or Mexico. It’s usually a lot cheaper than British or European asparagus, though carries a hefty environmental cost.

The United States paid a lot of money to convince Peruvian farmers to grow asparagus in the 90s, as part of its war on drugs. Farmers were paid off to grow asparagus instead of coca and the crop, new to the country at the time, has flourished since. Nowadays, asparagus is one of the country’s biggest exports. Apart from the huge amount of food miles involved in procuring Peruvian asparagus when the vegetable is not in season in the UK, there are some other issues with cultivating this crop in both Peru and Mexico, where water is often in short supply. You can read Rachel’s in depth article about it here.

When is asparagus in season in the UK?

The exact dates of the UK’s very short asparagus season vary from year to year because of weather conditions, but traditionally it’s from St George’s day to around the summer solstice.

Local, seasonal asparagus obviously has a far smaller environmental impact than year-round imports, which is why you’ll only see asparagus in our bags when we can source British-grown varieties.

How is asparagus grown?

Asparagus can take three years to grow from seed to harvest and two years when growing from “crowns”, which are basically one year old plants. Once it gets going, it can be harvested annually for up to 20 years. The spears start out with a very small diameter, about the size of pencil lead. As the plant gets older, the diameter of the spears increases.

In spring, the spears appear above ground and are usually harvested when they are 6 to 10 inches long.

White asparagus is one of the most labour-intensive vegetables to grow and is very popular in Europe and Asia. This type of asparagus is basically regular green asparagus that has gone through a process known as blanching. The shoots are covered in soil throughout the growing process. Without exposure to sunlight, the shoots remain white rather than undergoing photosynthesis. Known as “white gold” and “edible ivory”, white asparagus is considered more tender and less bitter, although it's slightly less nutritious than regular green asparagus.

Is asparagus good for you?

Which asparagus variety is best?

In terms of nutritional value, regular green asparagus is the most nutritious. Purple asparagus (which actually turns green when cooked) has a higher sugar (20% more in each stalk!) content and is therefore sweeter and nuttier. It’s best suited for salads and other raw uses that help keep its unique purple colour. It has slightly lower level of the various vitamins and minerals found in asparagus. White asparagus, while highly valued for its tenderness and flavour, also has lower values of these vitamins and minerals.

Why does asparagus make your pee smell?

You may have heard of or otherwise experienced the infamous “asparagus pee”. The main reason behind this harmless side effect is something called asparagusic acid, which, as the name suggests, can be found exclusively in asparagus. When asparagus is digested in the body, this acid breaks down into compounds that contain sulphur. These by-products evaporate almost immediately when you pee, hence the unpleasant smell.

It turns out not everyone experiences this side effect. Recent research points at a genetic variation that affects some people’s ability to smell asparagus pee. Are you one of the chosen ones?

How should you store asparagus?

Store raw asparagus in the fridge, either in a jar with 1-2cm of water at the bottom, with a plastic bag on top, or wrapped in a damp paper or tea towel. This way should keep it fresh for up to seven days (towel) or even 10 or so days (upright in a jar with water).

Can asparagus be frozen?

Asparagus can be easily frozen.  Wash, trim and cut it first. It’s best to blanche it before freezing (putting into boiling water for around a minute, then into cold water to stop the cooking process). Once blanched, drain and dry the pieces, then put them into freezer bags and freeze.

How do you prepare asparagus?

Asparagus is sold as either spears (the tender top of the step) or whole stems. If you’ve bought spears, which are already pre-trimmed, all you need to do is give them a wash and you’re good to go.

For the stems, you’ll need to cut or trim the woody ends at the bottom, then you can peel the outer layer of the stem from the bottom up to about half-way. This would cut down on cooking time.

It’s best that you cook the asparagus immediately after preparing it. If for some reason you suddenly can’t, store it wrapped in a damp towel as mentioned above.

What can you make with asparagus?