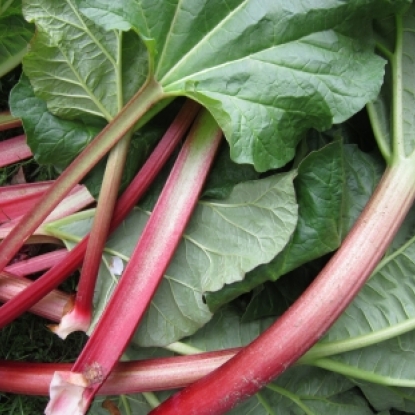 Although it’s technically a vegetable and not a fruit, we’ve decided to include rhubarb in the fruit section, as it’s used similarly to fruit. When it’s in season you can often find it in our fruit bags for this very reason.

With its distinctive red stalks, rhubarb may appear similar to celery, but the two are not related. Rhubarb leaves contain high levels of oxalic acid, making them toxic, while the root has been used as a digestive aid in traditional Chinese medicine for thousands of years. The edible stalks have a distinctive tart taste and are most commonly used in desserts.

How to keep rhubarb fresh

Rhubarb stalks will keep in the fridge for up to a month when wrapped in a piece of kitchen foil. Crimp the ends gently and avoid making it airtight.  Only chop the stalks into smaller pieces when you’re ready to use them or if freezing (see below), as stalks will keep for longer.

Can you freeze rhubarb?

Rhubarb can be easily frozen. Wash and dry the stalks and cut them into smaller pieces. Freeze in trays in a single layer to begin with to avoid sticking. Once frozen (it takes about 3-4 hours) remove from the tray and keep in a sealed bag or box in the freezer. When frozen in this way, rhubarb can be used for up to a year.

How to prep rhubarb

Rhubarb leaves are toxic and should never be eaten, so always make sure to trim them and discard. Wash the stalks and remove any blemishes with a knife or vegetable peeler. When using for crumble, pie, etc. chop into small pieces as per your recipe.

What can you make with rhubarb

Check out our growing collection of rhubarb recipes for more ideas.