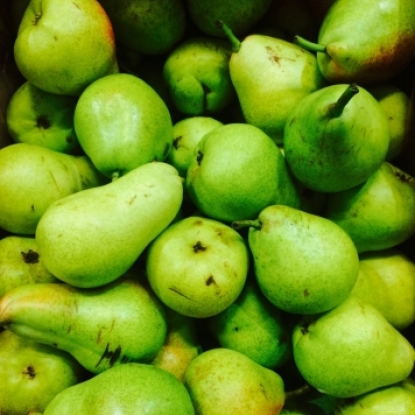 A member of the rose family, the ever-popular pear is related to the apple. As with apples, there are thousands of different pear varieties. Pears are thought to have originated in China, where they have been cultivated from as early as 2000 BC. Nowadays, China is the world’s biggest producer of pears. There seems to be some debate about whether the European pear developed independently of its Asian counterpart or is the result of the original Chinese pear spreading west to Asia Minor and then Europe. If you’re wondering how pears made it to the UK, you can, as always, blame the Romans, who had a well-documented love of both raw and cooked pears.

Pears are low in calories, easy on the stomach and good for aiding digestion, as they are high in fibre. They are a good source of antioxidants, vitamins C and K, and potassium. They also provide smaller levels of vitamin B6, magnesium, folate, iron, calcium and riboflavin. Red-skinned pears also provide good levels of carotenoids, flavonoids and other antioxidants.

How to store pears

Pears do not ripen on the tree, and they also ripen from the inside out. This means that a pear that’s soft on the outside may actually be overripe on the inside.

Unripe pears can be left at room temperature to ripen. You can speed up the process by storing them in a paper bag or keeping them next to bananas and avocados. A pear is ripe when its neck gives slightly to pressure when pressed gently. Once ripe, store pears in the fridge, where they can be kept for a few days.

Can you freeze pears?

Pears can be frozen when they are just ripe, but not overripe. Keep them refrigerated until you can freeze them.

To freeze, wash, peel, half and core the pears, then place them on a baking sheet and freeze in batches. Once frozen, move to a box or bag and label clearly with the date. Pears can be kept in the freezer for up to 10 months.

Just like apples, pears don’t really need to be peeled before eating if you’re eating them raw. Just wash them and, if you’re so inclined, slice them and core them. Pear seeds, like apple seeds, contain trace amounts of cyanide, but you’d need to eat a lot of them for this to cause you any harm.

Most pear recipes, however, call for peeling and coring the fruit. This video shows a great way to peel pears quickly, which is handy when you need to peel a lot of them!

What can you make with pears?