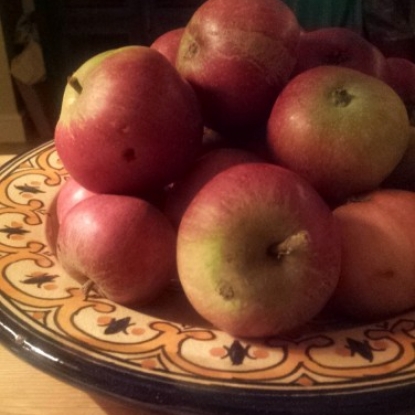 One of the world’s most popular fruit , apples have been cultivated for thousands of years and come in a variety of colours, sizes, and, to an extent, shapes. There are over 7500 varieties of apples grown worldwide, and over 2000 in the UK alone. Modern apples (the ones we eat) all belong to the genus Malus Domestica and have all originated from the genus Malus sieversii, a wild apple native to Kazakhstan. You can still find this original wild apple growing there to this day.

Apples were brought to Europe by the Romans (of course), who discovered them growing in Syria.  European settlers eventually took apple seeds with them to the new world. Ironically, the most popular apple varieties in the world today originated in the United States, (red and golden delicious), New Zealand (gala) and Australia (granny smith).

Apples are low in calories and rich in vitamin C, potassium and fibre, as well as several important antioxidants, including quercetin, catechin and chlorogenic acid. Some studies have shown that they can be beneficial in lowering blood sugar and cholesterol levels, preventing heart disease, and possibly even the risk of cancer.

How to store apples

Apples will last longer when stored in the fridge but have a naturally long shelf life. Store in a cool, dark place if not storing in the fridge.

Once cut or bruised, apples will brown quickly. Coating them in sugar, syrup, apple or pineapple juice once cut will help slow down this process.

Can you freeze apples?

Apples can be easily frozen and will keep for several months. Defrosted apples are best juiced or used in jams, cakes, applesauce and other non-raw recipes, though, because freezing them changes their texture.

It’s possible to freeze apples either whole or sliced. To freeze whole apples, place them on a baking sheet in the freezer, to prevent them from clumping together. Once thoroughly frozen, you can keep them in a box or freezer bag.

To freeze apple slices, peel, core and slice the apples, then dip them in lemon juice or blanch them for a minute or two to prevent browning. As with whole apples, freeze on a baking shit before removing and placing in bags.

How to clean and prepare apples

When eaten raw, all you need to do is wash the apples before eating.

Some store-bought apples are waxed in order to replace the apples’ own natural wax that’s lost after picking. However, there are strict rules in the UK and the EU about what type of wax can be used, making it completely harmless. If, however, you’d like to remove the wax, you can do it by either peeling the apple or by adding a tablespoon of bicarb of soda and a tablespoon of lemon juice to a bowl, add the apples and some warm water and scrub each apple gently until the wax is gone.

While apple seeds contain amygdalin (which releases cyanide into the bloodstream), you’d need to chew a very large amount of them in order to cause harm, so there’s no need to worry if you accidentally swallow some.

Most apple recipes call for peeling and coring the apples before use.

What can you make with apples?

Apples are great raw, juiced, baked, fried (as fritters) and preserved as jams, pickles and chutneys.

Although we often associate them with desserts, such as apple pies, turnovers, pancakes, etc., they are as much at home in savoury dishes, where they add a touch of sweetness or tartness. They can even be fermented, and we don’t just mean in cider form! In fact, brined apples are a popular Russian dish.

Different apple varieties are commonly used for different recipes, based on their level of sweetness and firmness. For example, granny smith apples are the favoured variety for baking pies, while bramley apples are often used for crumble.

Recipes will usually specify which variety is best to use, though if that’s not the type you have, you can generally still use it instead.

See our collection of apple recipes for even more inspiration.