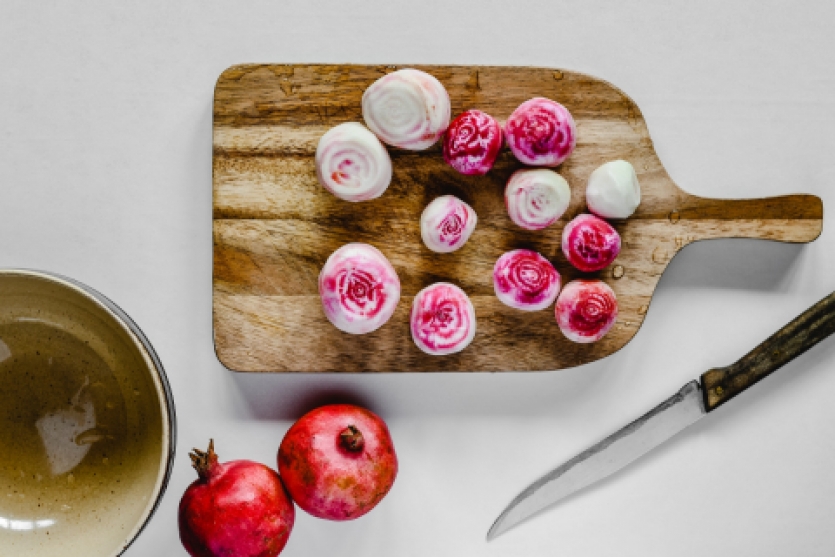 Seeing as a fancy Valentine’s Day restaurant dinner is out of the question this year, we get to choose between ordering a takeaway or cooking up our own feast.

In this post, we’ve collected some fun vegetarian and vegan Valentine’s Day recipe ideas you can make with things that are currently in our weekly bags.  We’ve chosen simple, easy recipes that look and taste great, so you can enjoy that added “wow” factor even if you’re not the most confident of cooks. As an added bonus, we’ve chosen recipes that call for foods historically considered aphrodisiacs, though not necessarily those you’d expect!

Before the introduction of chocolate, chilli peppers and other exotic spices, fruit, and veg to these shores, unassuming root vegetables such as beetroots, parsnips and leeks were considered aphrodisiacs, as were homegrown fruit like the humble apple. Luckily, there’s no shortage of these in our weekly bags, ready to be turned into that special Valentine’s Day dinner. We can’t vouch for the once popularised aphrodisiac qualities of these veg, but we do know they’re both delicious and good for you, which is pretty sexy in itself. 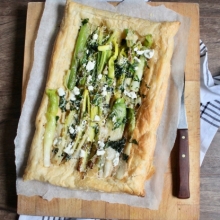 The ancient Greeks saw leeks as an aphrodisiac, probably because of their phallic shape. Schoolboy giggles aside, those who follow the Yogic diet avoid them alongside onion and garlic because they are said to increase both energy and sexual desire. This, however, makes them pretty perfect for a romantic dinner, as far as we’re concerned.

This attractive leek and cheese tart uses store bought puff pastry, so you don’t need to worry about making dough. It looks impressive but is really easy to prepare. As it’s not quite the right season for wild garlic, you can use normal garlic instead and add your favourite fresh or dried herbs.

For something a bit heartier, try this simple creamed kale and leek gratin recipe. Perfect for a cosy night in!

And you can celebrate the nation that first declared leeks sexy, by trying this Greek-inspired leek and rice dish.

You can find even more leek recipes here. 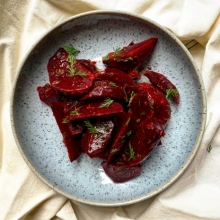 The Romans saw beetroot as an aphrodisiac, possibly because it contains high levels of boron (a trace mineral that can increase the level of sex hormones). It also dyes everything a wonderful shade of pinkish-red, which is just perfect for Valentine’s Day. Its versatility means you can use it for everything from starters to desserts. Here are some romantic highlights from our collection of vegetarian and vegan beetroot recipes.

Try this simple beetroot side dish for a more exotic take on your average cooked beetroots.

A bright red beetroot soup makes a lovely starter. Try this simple, yet decadent soup with double cream and dehydrated black olives, or opt for this spicy vegan beetroot and coconut soup for added heat (chilli peppers are also known as an aphrodisiac, after all).

This pretty, healthy beetroot salad also features pomegranate seeds. Apart from also being bright red, pomegranates have been known as a fertility symbol since biblical times and are known to increase testosterone levels in both men and women.

Fancy some pasta? This beetroot pesto recipe is easy and can make even the simplest pasta dish instantly romantic. In case you were wondering, both garlic and pine nuts are considered aphrodisiacs too!

And for the perfect dessert blending old world lore and new world (and, let’s face it, our world) amorous favourites, go for these rich beetroot, chocolate and ginger brownies.

Fruit are a somewhat more obvious choice when it comes to sexy food, though most of us are probably more drawn to strawberries or, perhaps predictably, exotic things like passion fruit. Apples, however, have long been seen as a passionate fruit in themselves, because of their starring role in that whole business with Adam, Eve and the snake. They’re also in season right now and grown locally, which is obviously a big plus.

This vegan apple and parsnip soup combines apples with the added sexiness of parsnips (listed in Medieval books alongside oysters and other more usual suspects as foods that inflame passion).

This simple (and vegan!) apple cinnamon cake is lightly spiced with warming cinnamon and is moist and delicious. Perfect to get your internal fire started on a cold night.

And if parsnips are more your thing, you can find even more parsnips recipes here.