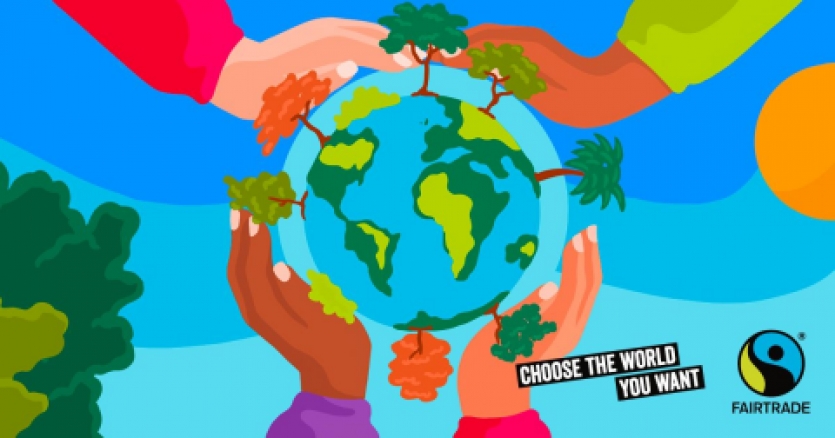 We’re now in the first week of Fairtrade Fortnight,  an annual event inviting us to consider the people who grow the food we eat and support fair living and working conditions for all.

When we think of “fair trade” we usually associate it with the developing world. This makes sense, because many of the commodities we consume in the western world are grown closer to the equator. After all, there are fair trade bananas, chocolate, coffee and tea, cashew nuts, and so on. Fair trade apples, pears and parsnips? Not so much. Workers in the countries where familiar fair trade crops are grown often have poor working conditions, few rights, and few (if any) legal protections. By choosing fair trade products we can therefore do our part to ensure workers in the poorest parts of the world are not being exploited for our own benefit.

But poor working conditions, inequality and exploitation are sadly not unique to developing countries. They can and do exist in our local food system as well, often right on our doorstep. The past year has exposed the weaknesses in this system, with labour shortages and talk of fruit and veg being left to rot in UK fields. We would therefore like to use this time to invite you to consider the meaning of fair trade in broader terms, which, ironically, means looking closer to home.

There’s been much talk this past year about labour shortages in the agriculture industry. Both Brexit and the pandemic have meant it’s been harder to get seasonal workers from the EU, while “lazy” British workers reportedly turned down offers to take their place. But while the “lazy youngsters” narrative may appeal to those looking to fuel the intergenerational conflict, reality is far more complex.

The problem with supermarkets

Supermarkets use their buying power to negotiate extremely low prices for produce, and operate a purchasing system known as the barcode or “just in time” system. The barcode system helps supermarkets eliminate risk by only reordering stock when a customer buys an item. This means orders can fluctuate by 50% or even 100% within 24 hours. Farmers, in turn, eliminate risk by only calling in labourers when needed, at short notice. There is no guarantee of pay or stable work, which paves the way for agents (aka gangmasters) to handle the supply of cheap, on demand labour on zero hour contracts.

The terrible human cost of such practices are set out in this article and include organised crime, exploitation (including workers driven to suicide) and seriously negative effects on the local community.

Even seemingly stable seasonal picking jobs were found to be incompatible with UK living standards. Newly unemployed would-be pickers discovered that farmers expected them to live in shared accommodation on site (and pay for it out of pocket) for an entire season, avoid using their own vehicle (live-in or otherwise) for transport, take no time off to see family, and work long, hard days  in all weather for potentially less than minimum wage, as many picker jobs pay per piece, not per hour.

Instead of deriding British workers for refusing to accept such exploitative working conditions, we should perhaps be wondering why anyone should, or would accept them. Global inequality is the only reason such cheap labour is still readily available, creating yet another form of modern slavery.

Who’s paying for our cheap food?

Fair trade is usually associated with a higher price tag. We’re often told (and often by supermarkets) that addressing inequalities and exploitation in the food system would come at a significant cost to us, the consumers. We’re told of low margins, high risks, and other reasons why paying workers fairly is impossible unless more is taken from us. But is there really no way to trade fairly without increasing end costs?

An increasing proportion of profits from the food system go to shareholders, rather than producers and workers. Supermarkets also have extremely high CEO- to-worker pay ratios (the ratio between the CEO's salary and the median employee salary). Consider the 2020 pay ratios for Morrisons (270:1), Sainsburys (234:1) and Tesco (306:1), taken from the CIPD’s executive pay report.  This uncomfortable truth is made even more uncomfortable when you consider how essential supermarket workers have been during the pandemic, as well as the fact that many are paid below the (voluntary) living wage. In a recent interview in Wicked Leeks, Dr Lindy Sharpe from the City University of London's Centre for Food Policy explained that the low wages of the lowest paid supermarket workers are essentially subsidised by the government. Many of these workers would be receiving top-up benefits in order to survive, which in turn,are paid for by taxes. But if the people harvesting, packing, and stacking the food can’t afford to buy it without additional government support, what is the point of making it so cheap in the first place? Could the money used to enrich shareholders and senior management be used to make the food system more sustainable instead? We think it can. 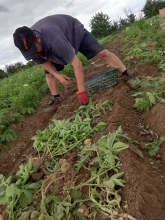 Perhaps unsurprisingly, fair trade principles can be applied locally in much the same way as we apply them to products originating in developing countries. And they don’t necessarily have to come with a higher price tag.

Increased demand for particular produce regardless of the time of year (we’re looking at you, avocados!) contributes to waste, environmental damage and worker exploitation. Changing our menu with the seasons allows farmers to grow different crops throughout the year, which in turn means farm work can be offered year-round, sustaining local workers.

Paying farmers fairly for their crops

Our producers are able to farm sustainably and pay their workers a living wage because they don’t have to deal with supermarkets. They sell their produce to us and other veg box schemes, as well as directly to the public at farmers markets. As a result, they get paid fairly for all their hard work.

Paying workers fairly for their work

Apart from buying from producers who pay their staff well, it’s worth looking at other parts of the supply chain before spending your hard-earned cash. Are workers treated fairly, or are they the ones paying for food prices to stay low while the CEO and shareholders get richer?

At Crop Drop workers are paid at least the London living wage and we keep the costs down by ensuring the pay ratio is capped at 2:1.

A Fair System for all

This past year, we’ve seen our principles prove themselves in action more than ever, creating a resilient food system that allowed us to keep going throughout the pandemic. Using fair trade principles allowed us to provide real, tangible benefits to our customers:

A resilient food system is a fair food system, where everyone involved earns a living wage and is treated fairly. We believe that this is not only possible, but essential to our continued survival as a species. We encourage you to choose the world you want by supporting fair trade both locally and globally this Fairtrade Fortnight and beyond.